A question on carriers

Could someone please explain to me why we're building two 65000 ton carriers instead of three or four Harrier Carriers at 20000 ton each?

Posted by Silent Hunter at 6:13 PM No comments:

The revolver was stored in a plastic bag in the cistern. This was generally considered a good place to hide things; although law enforcement had long got wise to that. Marie did not plan on having the police visit her anytime soon.

She pulled it of the cistern and threw the empty bag into the bin; she'd get another one later. She checked the revolver was loaded and then stuck the weapon into her waistband.

She headed out of her flat and locked the door. Walking over to the central area, she pressed the button to call the lift. It actually was working, but this wasn't a surprise to Marie. Even graffiti artists didn't like using the stairs.

Six floors down to the ground. She opened the door out into the warm night and walked towards her Suzuki motorbike. It had its advantages if you wanted to escape, but it was an absolute nightmare when it rained.

She kicked the starter a couple of times. The engine stuttered and failed to start. Three more times all yielded the same result.

Marie swore silently. This was not helpful. She'd have to take public transport. She might well get there too late.

The tube station was a bus ride away; the buses were running, but not too frequently.

She had to wait twenty minutes for the bus to arrive. Were assassins supposed to use buses? She got on board and used her Oyster card; cash would have looked suspicious. She took a seat and reached for an MP3 player in her jacket.

The automated announcer told her the number of the bus and its destination, a Tube station.

She would be there in twenty minutes. She was still an hour away from Simon.
Posted by Silent Hunter at 10:16 PM No comments:

Well, this is a bit of a situation; both parties need the support of independents to be able to form a government; independents who might not all go the same way on any issue.

Think I'll be voting for Ed Balls; not too keen on the others.

It seems that all the candidates want to move us to the left. Considering the reasons why we lost, that's not the world's best idea...
Posted by Silent Hunter at 9:25 PM 1 comment:

As a person who has never experienced actual battle in any way, shape or form, particularly an air raid, I don’t have a real appreciation of the sensory environment of modern (or for that matter ancient) warfare, particularly the noise.

The next aircraft adequately demonstrated that. The F-16. This was the third loudest aircraft of the day. I was standing near a hot dog vendor when this thing swooped over at high speed – and managed to set a car alarm off just by the sheer level of vibration.

It then proceeded to do the usual acrobatics. It’s worth pointing out that this aircraft is still in production for non-US customers and still operating in American service. While I don’t like single-engine fighters and the range isn’t brilliant, I can appreciate that it provides value for money. I wonder if the RAF ever seriously considered purchasing any (the idea gets mentioned in The Third World War). 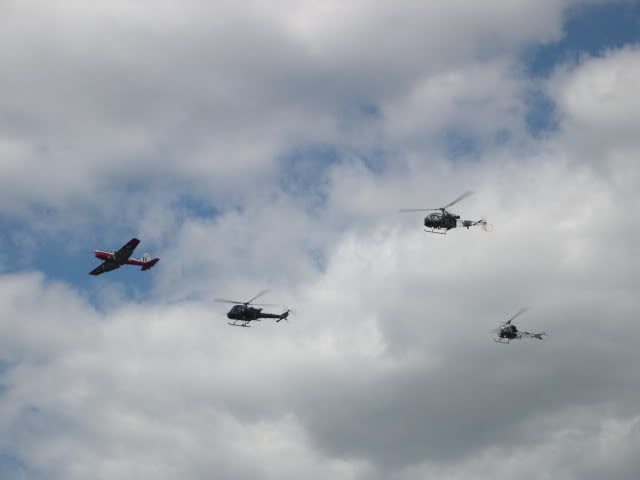 Following this were the Army Historics. Three old Army Air Corp helicopters and a prop aircraft I can’t really identify. Helicopter construction has really come on apace since the Korean War; you can’t imagine any new military chopper with what is essentially scaffolding for a tail.

My camera battery was starting to run a bit low at this time, so I didn’t take any more photos for a while.

The “Red Devils” were next, an Army parachuting team that did a rather impressive display – I’ve never seen a real life parachute jump before and this was a bit of an experience for me. Probably something I wouldn’t want to do myself – the landing always looks a bit heavy and I don’t like unsupported heights.

Next up was the Great War collection, a collection of First World War era fighters from both sides that engaged in mock dogfights complete with trailing smoke and an interesting commentary over the top. With the number of surviving veterans from this period very close to zero, it’s a timely reminder of this very early period of air warfare.

The big rotary wing presence was the Chinook. I’ve seen these fly a few times in London; they have a distinctive sound due to their counter-rotating twin rotors. This demonstrated fast-roping insertion and casualty evacuation; both practices that it has to employ on a regular basis in the dusty environs of Afghanistan.  I didn’t get a brilliant view of this (I was heading somewhere else, mainly somewhere where I wouldn’t need ear plugs for the F/A-18); but impressive nonetheless.

Then came the Super Hornet. The flight deck of a carrier must be a very noisy environment; I felt actual vibrations in my chest when this thing took off. I was right up next to the flight line, but this was half-way down the runway and it was still cover the ears loud.

Then we took a step back in time to the Battle of Britain, 70 years ago this year. A Hurricane was first up; these aircraft primarily went after the bombers in the Battle while the Spits took care of the escorting fighters. It probably brought memories for the oldest people there; who saw these aircraft fighting in this area in 1940 – remember that Farnborough was a long-standing testing base as well.

Then we had a Spitfire and an Me-109 doing formation flying. The Me-109 wasn’t a Second World War veteran, but rather a Spanish example that was used in the Battle of Britain movie. They made interesting companions; two of the key opposing aircraft of the war flying side by side.

Then came the Battle of Britain Memorial flight, including a Lancaster, a Spitfire and a Hurricane. I was in the Diamond Paddock for this; the aircraft flew all around the arena and did level flights over the crowd; the only aircraft that did any crowd over flight at all. There was some turning and climbing, but not a huge amount – the programme pointed out that this are planes you don’t take risks with. 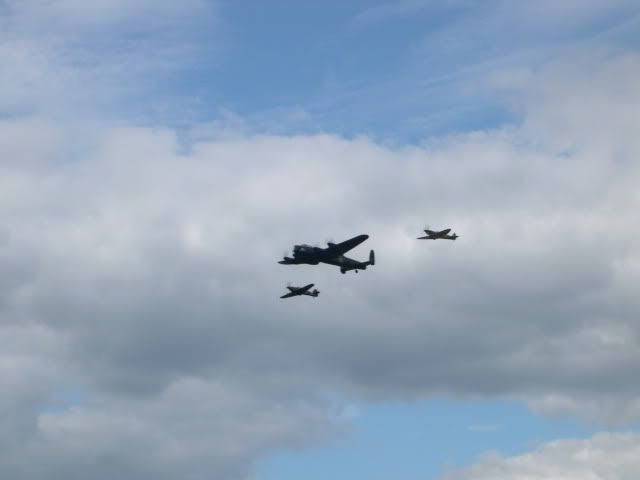 Then we had something nice and modern; the Eurofighter Typhoon. Now this was another loud one, but not too loud. I’m a Typhoon fan; the aircraft is unfairly maligned as a Cold War relic when it’s better than the F-35 in some missions.

This thing, a BAE test plane, was apparently fully loaded for a combat mission – it does a short (400 metre or so) take off and goes pretty much to 70 degrees climb straight off the runway! Then the pilot hurls around like it’s a much lighter aircraft, with burner on throughout and making a fair amount of noise. Seriously, that is an agile aircraft.

Following the Typhoon’s short display, I had fish and chips for dinner – it was early, but I wanted to keep an eye on the display at 4.30pm and I couldn’t do that while eating. Good fish and chips by the way; even if a bit hard to eat (you can’t really eat cod with a chip fork).

Yep, the Red Arrows; the RAF’s display team. They did a full half-hour display in their Hawk trainer jets, including all the classic moves, with a useful commentary and cockpit radio provided as well. Red, white and blue smoke was prominent; the display ended with a staggered peel-off for the final approach and landing to ensure a safe separation. Very impressive.

I started to make my way towards the exit; I suspected it was going to a long time to get out of this place. As I made my way through, an RAF King Air did a display to the tune of “Mister Blue Sky”. Not too impressed with that personally.

I was halfway to the exit when the Vulcan was ready. My binoculars certainly got a lot of use here. 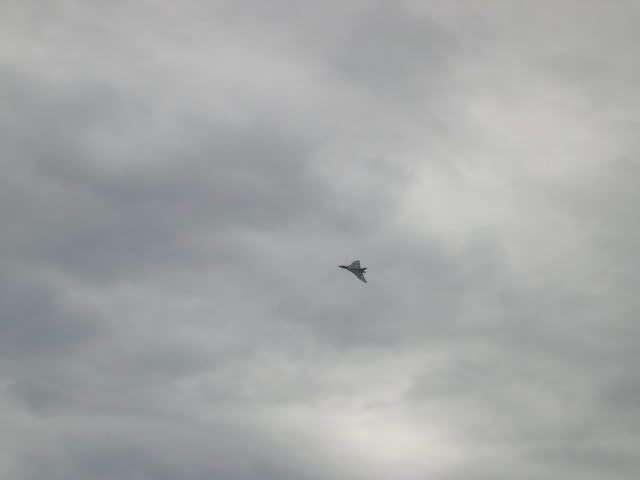 The four Olympus engines that powered this made a very loud noise on take-off, nearly F/A-18 loud and I was further away! If you lived near one of the Strike Command bases and you heard a lot of those take-off, you’d know that the Third World War had started.

The display was graceful and elegant, showing the agility of what was a strategic bomber design. Winters didn’t barrel roll it (that has been done on a Vulcan), but he certainly flew it like a fighter.

It landed and that point I made the long journey to the exit; having to queue for a bus back to North Camp and my journey home.

The sunburn may have gone, but the memories won’t – it was a great day out.
Posted by Silent Hunter at 4:36 PM 1 comment:

The big guys come out to play (Farnborough: Part Three)

Once The Blades were done, the bigger aircraft were coming out to play. 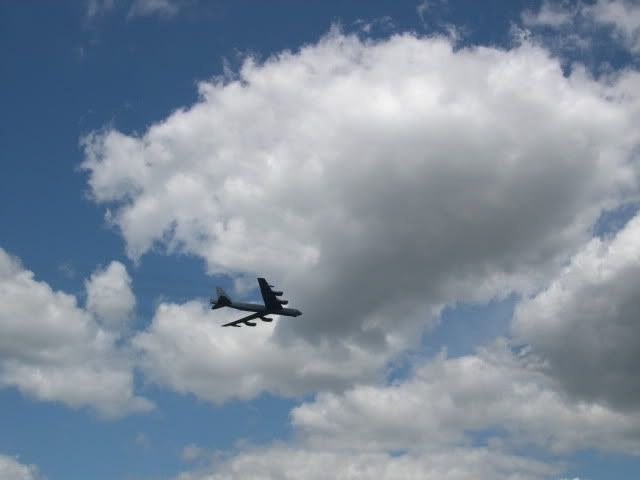 Like this particular bad boy. Providing the core of US strategic air power for almost 50 years now, this is a B-52H Stratofortress, one of the world's most capable bombers. This was only doing a straight West to East fly-past and not a full display, but was spectacular nonetheless. I'm glad I brought my binoculars for this.

I headed off to look at some of the other areas, as a Catalina flying boat, without its floatation tanks (they needed repairs) flew about. These played a key role in the anti U-Boat campaign, protecting Allied shipping from the German submarines - one of them spotted Bismarck as well. 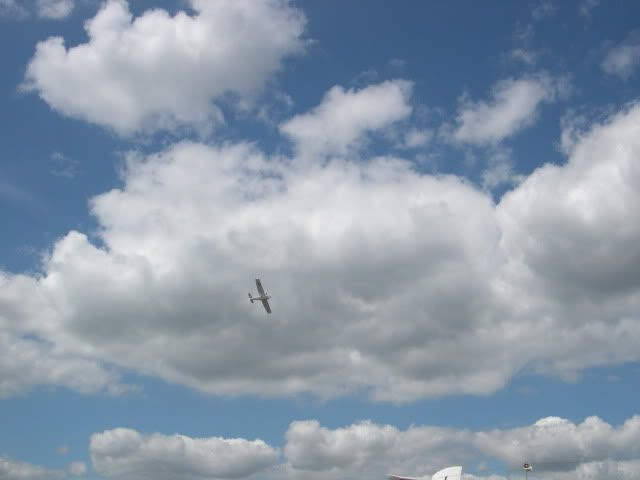 A Sea Hawk (a 1950s carrier jet fighter) and a Seafire (a naval version of the Spitfire; which I didn't know that they'd actually done) did their display, but I wasn't too interested in this- I'd never heard of the Seafire and I'd have probably paid more attention if I had.

I headed into the BAE Systems area after looking at a Typhoon mock-up. The area was dedicated to the controversial company's products and included models (not to scale with each other) of their new warship designs, including their Khareef class corvettes for Oman, a patrol vessel for Trinidad & Tobago and the two new British carriers (if they're not cancelled). 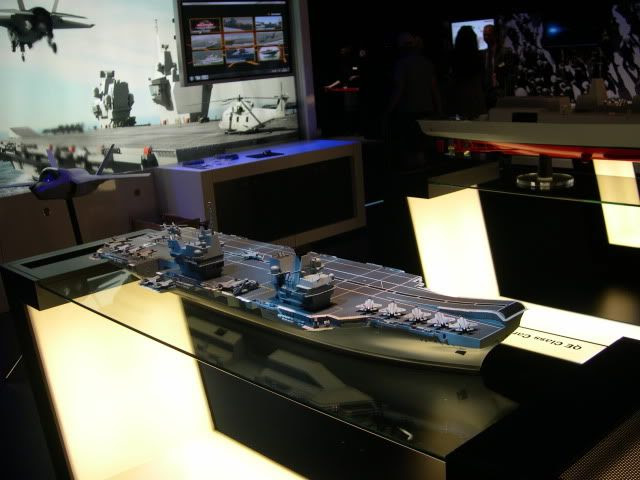 I talked a bit of shop with the guy there and asked him about the Type 26 frigate proposal model they had there. He said ('Pooners may want to take note) they were looking at 5-6,000 tons displacement and CAAMS armament, but not PAAMS - so an FF, not an FFG.

Then I saw something that was also making its debut here; it may well feature in some Harpoon scenarios. Two of them in fact. I wondered what it was (some kind of Mirage, perhaps?) until I recognised the Pakistani flags on the pilots' uniforms. 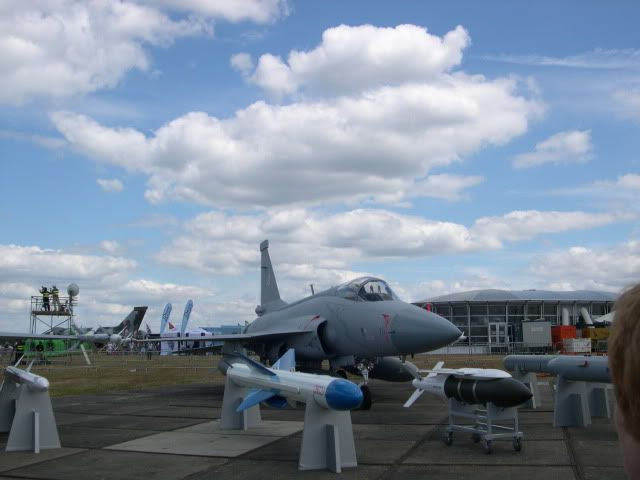 The JF-17 Thunder, the new Chinese-Pakistani fighter, making its Western debut here. It didn't fly on that day.

I saw the C-27J Spartan do its display; an good light air lifter that has yet to get many sales and then went to look at a Battle of Britain display, rushing out when I heard the M346 light attack aircraft/trainer arrive.

The C-130J Super Hercules then did its display. Both this and the Spartan did steep ascents from take-off; a key element in hostile areas where someone might be waiting in the bushes with an Igla hand-held SAM launcher.

Then, the noise was brought.

(Part Four)
Posted by Silent Hunter at 9:40 PM No comments: