May I wish all my readers a very happy Easter.

He is risen indeed, Alleluia!
Posted by Silent Hunter at 6:19 PM No comments:

My 9 Points:
1. CE made an all-round good performance. Showed genuine emotion about Rose's apparent demise (we all knew she'd survived anyway) and genuine anger that I haven't seen for ages in the Doctor.
2. BP did what she did very well indeed, which was make quips (the slap one was good) and feel sorry for the Dalek. I was thinking "No, Rose, it's going to kill you".
3. I've never felt sorry for a Dalek before, but I have now. A brilliant vocal performance by Nicholas Briggs, conveying genuine sadness and tenderness. The Kaled creature was actually slightly cute.
4. Henry van Statten was brilliantly slimy at the beginning, but you had to fell sorry for him at the end when he got carted off on the orders of the character I'm nicknaming Michelle.
5. So that's what the sinkplunger does. Ouch.
6. There could have been a bit more action in this episode. What there was, however, was done very well.
7. 'Five Rounds Rapid' never works, does it.
8. "The woman you love" was the funniest line of the episode.
9. Adam was a nice enough character. I can see why Rose took a shine to him.


I voted 4, but it should be actually 5. The most emotional episodes of this series. A bit slow at the beginning, but a touching ending. In a choice between World War Three and this for best episode so far, this is it.
Posted by Silent Hunter at 4:05 PM No comments:

1. CE was quite simply brilliant. He had brilliant lines throughout and was acting to the hilt. Also very funny as well.
2. BP again suffered from having little to do except get chased by the Slitheen. Did a half-Victoria (that's my name for a companion scream), but acceptable in the circumstances.
3. 'Mickey the idiot' actually pulled off a rather good performance here. It was nice to see him saving the day. Jackie on the other hand is rapidly becoming the weakest of the group.
4. The curse is broken! Harriet Jones didn't die, gave a lot of helpful hints and generally acted very well.
5. I'm assuming the Doctor was reading Mickey's mind down the phone when he gave him all those detailed instructions. That, or he's got one brilliant memory.
6. Nice to see the super mobile phone back. It has great potential here.
7. A very well-written plot, with some good twists.
8. The Slitheen were great and repulsive already. Good on the CGI- monsters that can run!
9. Where were the flags in the shot of the UN?
The word I used to describe 'Aliens of London' was competent. This episode is worthy of the word brilliant. What flaws there were in this episode were insignificant. Best episode of the season so far and in my opinion, up there with episodes like 'Caves' and 'Talons'.Well done Russell T Davies!
Posted by Silent Hunter at 4:04 PM No comments:

1. Not one of CE's best in my opinion. His flying over to take a look at the alien was interesting, he had some good lines, I liked his resumption of command. No real gems of brilliance though.
2. Billie Piper didn't really have much to do in this episode. What she had she did well, but this was really CE's episode. Nice to see a portrayal of the effects of time travel on those who are left behind.
3. A joy to see the return in some form of UNIT. Pity we didn't have a distinct UNIT character like the "old days", but nice to hear them mentioned. My thoughts about their whole involvement will probably go elsewhere.
4. The Slitheen- who thought City of Death here? I did. They looked almost cute in the pictures, but they're pretty evil and quite effective. The wind gags weren't as bad as they could have been.
5. The pig was done surpisingly well, considering it's a walking pig. You did feel sorry when one of the soldiers went "Five Rounds Rapid" on it.
6. "Harriet Jones, MP Flydale North". Somewhat of a cardboard character here.
7. I've got to say that the plot was pretty well written. Using the crash landing to lure UNIT's top people into a trap- simple but effective.
8. Jackie Tyler is starting to irritate me.
9. There was a good cliffhanger here. They then had to go and ruin it with "The next time". There shouldn't be one for these sort of endings.

The word I would use to describe this episode is 'competent'. I have no strong feelings either way on this episode. Nothing brilliant, but nothing awful. Hopefully, the second part will do better.
Posted by Silent Hunter at 4:03 PM No comments:

The people of Italy have spoken...

We're just not entirely sure what they've said.

Italy is probably going to have a recount, since Berlusconi wants one and this thing is very close anyway. There's also the ex-pats vote still to be counted.

Prodi will probably win the Chamber of Deputies, but he could still lose the Senate. Without the Senate... we play the contest again.
Posted by Silent Hunter at 11:37 AM 1 comment:

1459: No real change in the second exit poll, but I'll try and get more details.
1501: I'm going to look for a faster Italian website.
1503: And I've found it with Italy's other network, MediaSet.
1507: Turnout's up 2.4% from last time at 86.9%
1524: I've got coverage from La Repubblica TV.
1526: In the Chamber of Deputies, it's expected to be 340 seats for the Union, 270 for CdL. There's been no change for the Senate from my earlier report, still 139-150 for CdL, 159-170 for the Union.
1530: No actual results yet. Things could still change dramatically.
I think the guy's saying this was a referendum on Berlusconi. Well, he's probably lost it then.
1532: We've gone to the ads. The first results are in.
1534: Those results are only for the Senate, however.
1538: Early results match the exit poll pretty closely, but very little has been counted.
1539: I'm looking at the regional breakdowns. Noticeable variations in support among individual parties and some alarming levels of support for the AN.
1541: First Chamber results and within exit poll bounds.

Right, that's it. I'll make the rest of my comments tomorrow.
Posted by Silent Hunter at 2:58 PM No comments:

(This is a change to my usual policy of not making comments until 90% is counted. I decided to LiveBlog this- it is a big election. I did Live journals for USA 2004, UK 2005 and Germany 2005 as well. I should have said "I won't make comments" rather than "I don't" earlier post. Sorry for misleading people)

1413: I'm trying to get Rai's election site up, but it's going really slowly at the moment. I think I'll try and look elsewhere).
1417: Reuters are reporting that the exit poll is for both houses and that there'll be a bigger exit poll at 1445. Points out that these polls can be wrong dramatically.
1424: I'm going to try and find a regional breakdown of this poll if possible, but it'll probably be junk in 20 minutes time.
1425: Prediction is that the Union will win 167 out of 315 seats in the Senate. Rai still going slow.
1427: Correction- Senate seat breakdown is:
Union 159-170
House 139-150
1429: Sound the alarm bells- Alleanza Nationale have come third in the Chamber elections, with at least 10% of the vote. I've got a party break down of the exit poll.
1432: It appears Forza Italia are the lead party in the Senate, but it's the coalition scores that count.
1437: I'm trying to get a regional breakdown of the exit poll.
1438: CdL (as I'll call House of Liberties from here on in) have won Sicily, Venice and Lombardy, but nowhere else. Union has won Emilio-Romagno and Tuscany very handily (60% in each).
1440: Five minutes until exit poll 2.
1441: No results for Valle d'Aosta or Trentino. Lazio looks like it could the one to watch.
1445: EP2 should be up any moment.
1448: It's not loading. Off to the Beeb.
Posted by Silent Hunter at 2:50 PM No comments:

Polls have just closed in Italy and the exit poll says:

(The post time has been edited, because I posted a blank post too early).
Posted by Silent Hunter at 2:06 PM No comments:

Until we get the Italian exit polls.

I'm going to liveblog this election for the next two hours.
Posted by Silent Hunter at 1:55 PM No comments:

Hungary's going to go to a runoff, because no-one won a majority. I can't find a result map, but it seems to have been close nationwide.

Peru's also going to a runoff.
Posted by Silent Hunter at 11:59 AM No comments:

Election in the Eternal City

((This was drafted in a hotel room in Rome and edited slightly afterwards to avoid obvious errors)).

It's not every day that you get to see a head of state.

The foreign head of state I saw was President Ciampi of Italy. He was entering a building with the headquarters of the Sovereign Order of Malta at 68 via Condotti.

As he got out, he was met with applause and cries of 'Bravo'.

I got a photo of him- as you can see here: 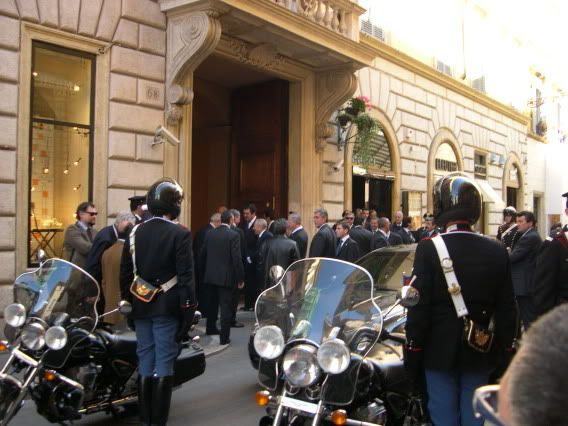 This was taken on our way to the Vatican but what I saw there can be discussed another time if you want.

Italy as you may know has its election on Sunday and Monday. Since I happened to be in the city a few days beforehand, I decided to report back to you, my readers.

So here are a few of the posters that I saw as I toured the city. My Italian is practically non-existent so I apologise in advance for any errors in translation.

Parties in Europe seem far more willing to use pictures of their leaders and candidates in election poster. I don't know why. Can you imagine Tony Blair appearing on a Labour poster? 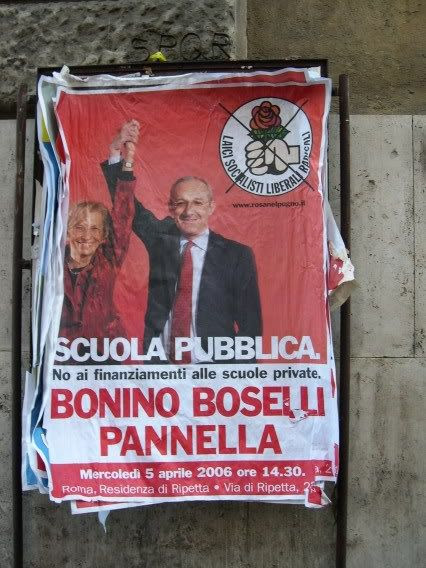 This one's for the Socialist Liberal Radicals 'laici'. I notice that in Italy that a cross through something means vote for it- it has a different meaning in Britain.

I think this means they oppose state funding of private schools. 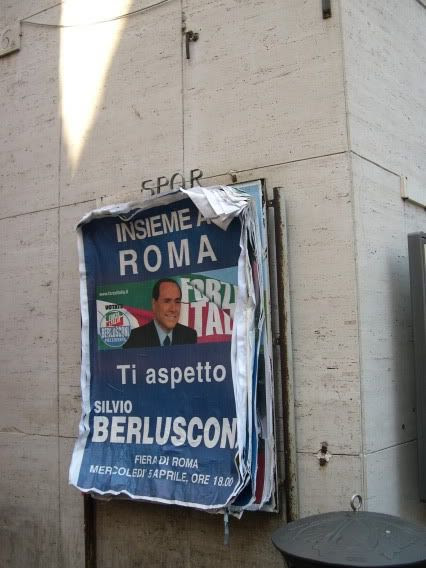 Here's the incumbents- Forza Italia. It's announcing that Berlusconi is speaking in Rome on the 5th (this was taken on the 4th). 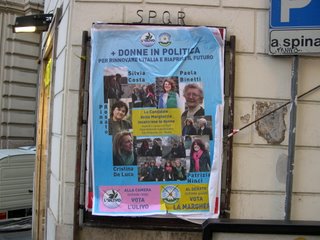 Here's Ulivo. This one's a 'meet the candidates' poster- who want to innovate Italy in the future. 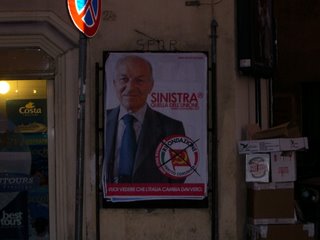 The Communists are still pretty big in Italy (partly because they completely disassociated themselves from the Soviet Union early after the war). I don't know why 'Sinistra' is a registered trademark (I assume that's what it means- it does so in Britain)- could someone enlighten me? 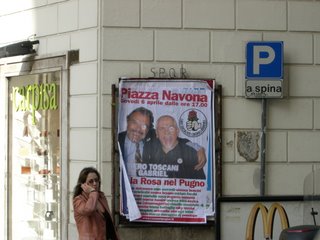 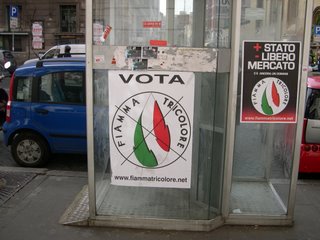 I've never heard of these people- can someone enlighten me? 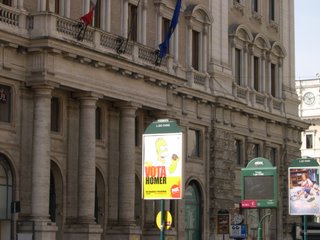 If you don't like any of the parties, you can vote with your fingers and watch TV (there was one of the Fonz from Happy Days as well).
Posted by Silent Hunter at 2:44 PM No comments: