Screenshot: Charging in with dualies 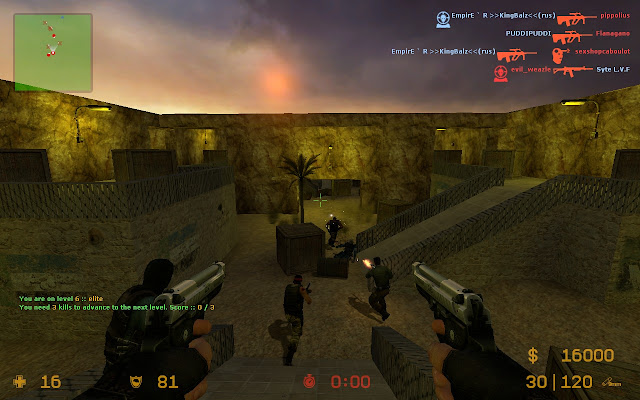 Posted by Silent Hunter at 5:50 PM No comments:

cs_dracula: How not to do a map 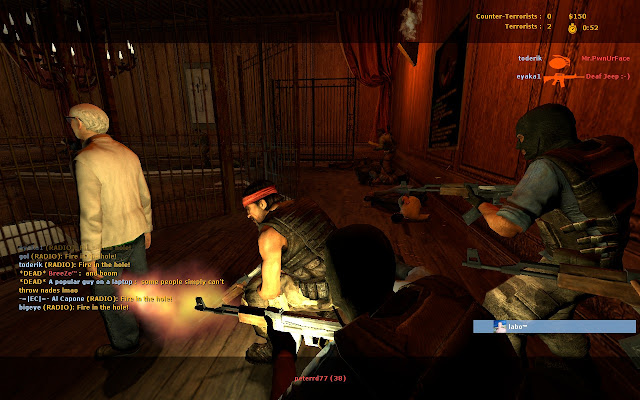 Terrorists blasting away - yes, three hostages have already died in the crossfire.

I've just come off a game of Counter-Strike: Source on the UKCS server. The second map I played during my time on the server (great servers BTW, I would highly recommend them) was cs_dracula.

This was a hostage rescue mission in a Dracula-style castle with spiral staircases, long winding passages and portraits of famous horror characters.

However, there are two problems with the map. One, the lack of a map in the whatever the map screen thing is called, isn't too bad.

The second though is huge. The hostages are located in a room with only one large entrance and a long staircase on one side. It's a terrorist camper's dream.

Seriously, that map needs a redesign, because even I know that violates a key rule of multi-player map design.
Posted by Silent Hunter at 5:34 PM No comments:

Pirates of the Burning Sea downtime

The online MMORPG I play, Pirates of the Burning Sea, has just had 14 hours of downtime after a patch uncovered further issues the tech team needed to fix.

I'm curious to know why they didn't keep the website up and whose idea it was to patch on a holiday weekend.

It's a good thing that I'm not paying any monthly subscription for this. Please don't do this again.

Edit: This isn't to say that the game isn't good - it's just that stuff like this really annoys me because I want to play it.
Posted by Silent Hunter at 10:29 PM No comments:

Email ThisBlogThis!Share to TwitterShare to FacebookShare to Pinterest
Labels: Computer Gaming, Pirates of the Burning Sea

I'm wishing all of my readers a Happy Easter!
Posted by Silent Hunter at 3:10 PM No comments:

Email ThisBlogThis!Share to TwitterShare to FacebookShare to Pinterest
Labels: Easter

The tabloid newspapers in the UK have made a lot of comment in the last week on judicial decisions to grant super-injunctions on the alleged infidelities of certain high-profile figures.

They're arguing that these judges are acting against freedom of speech, but I'm not entirely sure that there isn't some ulterior motive; selling newspapers.

Freedom of speech to me is about freedom of opinion and the right to express that opinion, also the right to expose governmental corruption and ensure that the public can make an informed decision at election time. I'm not entirely sure that the creators of the European Court of Human Rights, or for that matter, the US Constitution, were exactly envisaging their rights being used to spread salacious gossip and muck-raking.

Caitlin is an attractive newsreader for a major television channel. She is married to Bob and they have two primary-school age children.

Caitlin had a brief affair with struggling model Andrew, for reasons we won't go into here. Eventually, Caitlin couldn't live with herself and confessed everything to Bob. Bob has forgiven her and the two are trying to rebuild their marriage.

Now Andrew is trying to sell his story to a newspaper.

Now, here's some questions: is it really fair to expose Caitlin, Bob, their two children and all their friends and families to massive media intrusion, as well as the lurid details of Andrew and Caitlin's affair? Whose interest does it serve?

Also, while celebrities voluntary expose themselves to the media eye, but are they not entitled to a private life as well?

Please leave your thoughts below.
Posted by Silent Hunter at 5:01 PM No comments:

Review of 'Doctor Who: The Movie' and other plans

I've done a review of the Doctor Who TV movie over at my other blog.

Future reviews will either go here or there - probably there. My plans include a review of all 7 episodes of the first half of the upcoming season of Doctor Who, the Castle episode "Nikki Heat" when that airs and a grand review of Spiral season three, which will probably be entitled "Madame Shouty".

I also will be voting NO in the AV referendum on 5 May.
Posted by Silent Hunter at 1:55 PM No comments:

I've just heard the news of the death of Elisabeth Sladen, best known for her role as Sarah Jane Smith in Doctor Who.

She will be deeply missed by millions of fans.

Rest In Peace.
Posted by Silent Hunter at 10:06 PM No comments:

It's Holy Week this week. Last Easter I posted seven posts on the subject of Jesus' last week before his death. To avoid repeating myself, I'll link them here. Please take a look at them, hopefully you'll learn something.

David Cameron, in what looks to me to be an attempt to divert attention from the lack of support for NHS reforms, is today making a speech about immigration.

One common statistic is that 75% of jobs created in the last ten years have gone to foreign-born workers. Of course, the term "foreign-born" is one that could be highly misleading.

Let me give some examples where this could get ridiculous from here and abroad:
Here's a suggestion to some of my fellow left-wingers. Next time someone complains about immigration, ask them if they watch/watched Hustle, NCIS, Waking The Dead or House...

There's a great article from the Office of National Statistics on this. I would particularly advise people to look at Tables 7 and 8.
Posted by Silent Hunter at 9:07 AM No comments:

50 years ago today, Yuri Gagarin, a Soviet test pilot, was launched into space in Vostok 1. After orbiting the Earth more or less once, he ejected from his capsule after a safe re-entry, landed in a field. He then had to ask a startled farmer and his daughter to find him a telephone. Some more information about the flight can be found here.

Gagarin's first journey, which was very much a venture into the unknown for a human being, is a source of great inspiration for many. About 530 people have followed in his footsteps, 12 of them to the surface of the Moon.

I'm unhappy that we're now taking somewhat of a step back with the retirement of the Space Shuttle and I hope we'll have new reusable spacecraft soon.

It's a shame that Gagarin is not here for this anniversary. Rest in Peace.
Posted by Silent Hunter at 10:28 AM No comments:

Some rather annoying stuff going on at Phoenix Roleplaying. As my main RP site, I'm naturally unhappy about this.

Hopefully we'll get it sorted soon.
Posted by Silent Hunter at 5:50 PM No comments:

Email ThisBlogThis!Share to TwitterShare to FacebookShare to Pinterest
Labels: RPing

I see the papers are doing their usual round of April Fool's Day jokes... including The Guardian doing a "live feed" on the upcoming Royal Wedding.

Personally, one of my favourites was Planet Half-Life's 1999 "announcement" of Half-Life 2...
Posted by Silent Hunter at 10:27 AM No comments: