70 years since the Liberation of Auschwitz

Auschwitz; a name synonymous with the worst of humanity. The site where over a million people were murdered by practitioners of a warped ideology that is sadly still with us.

Today marks the 70th anniversary of the Red Army liberating that camp and the 7,500 prisoners who had managed to stay alive in there after the Nazis left them to die as they were too sick; many of the others died on the death march westwards.

The actions of Hitler and his cronies can only be described using one word: evil. As the last survivors pass on, it is our duty to make sure that they are never forgotten.

To all who perished in the camps or at their hands: Rest in Peace. I hope and pray that we never have another event like that.
Posted by Silent Hunter at 7:48 PM No comments:

For the first time in a good number of years, we have a far-left government in the EU. Syriza capitalised on hostility against the austerity imposed on Greece; but the question is now how well they (and their very unlikely coalition partners) do in office.

If they succeed, other left-wing parties may head down the same track. If not, it will be a big blow for everyone who is unhappy about the impacts these bailouts have had.
Posted by Silent Hunter at 7:15 PM No comments:


I'll begin at the end, with the end credits sequence. In most shows, this is just a bunch of boring black screens or a scrolling text. Not in Trek, that's for sure. We have a whole bunch of images designed (and quite successfully I might add) to whet our appetite for upcoming episodes; some of these, which vary from week to week, are rightly considered iconic.

In this episode, the crew come across a communications pod from a long-lost vessel (my first thought - "it's a garbage pod!") and upon entering a pink swirly thing in space, one of their crew, an old Academy colleague of gets funny eyes and strange powers.

(I decided to look up the two guest stars after seeing that Gary Lockwood's name sounds familiar. I've not really heard of him, but Sally Kellerman is best known for her role in MASH, where she played "Hot Lips")

We get to see Kirk having to face the difficult decision of basically killing a long-term friend of his and the climax sees not only him get his top ripped (this episode, oddly does not feature Uhura or the mini-dresses), but also chew the scenery. Parodies of Kirk usually focus on this last part, but Kirk is a complex and multi-layered character.

It also marks the debut appearance of two other staples of the franchise - Scotty and Sulu. I will say that I have problems understanding Scotty - and I used to watch Taggart.

Another highly entertaining episode, but it does drag a bit nearer the end.

Posted by Silent Hunter at 6:00 PM No comments:

I'm almost three-quarters of the way through Tolstoy's classic unit of measure for book longevity and plan to do a review once I've finished. While I'm having difficulty keeping track of all of the characters, I'm finding the description of the Napoleonic Wars very illuminating. In this age of instant access to information, we tend to forget that it wasn't always like that and a conflict could be concluded by the time the message saying it had started reached a capital city... and you could wait for months for a reply to your letter.

Life was a slower pace back then, I guess. I wonder if people got as bored as they do now.
Posted by Silent Hunter at 5:46 PM No comments:

Over three hundred quid it seems!

We go into another classic plot here, namely "major alien power ends up in the hands of someone who doesn't really know how to use it". The "seen it before" aspect is mitigated considerably by the fact that this is one of the shows that created said plot; I suspect I'm going to see some more of this as I make my way through Trek.

One particular character that is particularly standing out for me is Yeoman Rand. It's not the hairdo that could serve as a crash helmet, nor the ridiculous pink dress she sports in this one... but her uncanny resemblance to one Chloe O'Brian. It turns out that I'm not the only one to have thought that...

(It also seems that Grace Lee Whitney was rather shoddily treated back then. The 60s were definitely not a brilliant place to be female in television)

This is another enjoyable episode, but to be honest, I'm waiting for Sulu, Scotty and Chekov to turn up. The crew isn't complete yet. 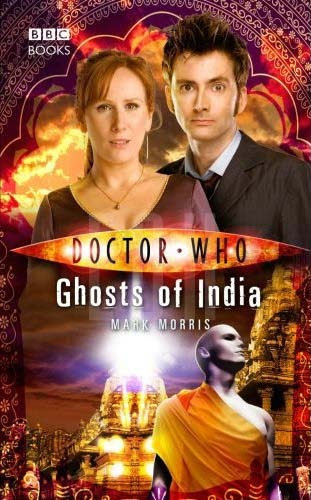 And thus my series of Doctor Who reviews concludes with a novel featuring what is still my favourite Doctor.

Set during Season 30/Series 4, this features the Tenth Doctor and Donna.
The plot

The Doctor and Donna head for Calcutta in 1937... and end up arriving ten years later, at a turbulent time in India's history (i.e. just before independence). People are going missing and strange white 'half-made' men are appearing. Teaming up with Gandhi, the time travellers investigate.
What works

A good novel, but not one of my personal favourites.

Email ThisBlogThis!Share to TwitterShare to FacebookShare to Pinterest
Labels: Doctor Who, Reviews

We do not beat terrorism by ignoring the threat, but nor do we inflate it to silly levels.
Posted by Silent Hunter at 5:09 PM No comments:

Email ThisBlogThis!Share to TwitterShare to FacebookShare to Pinterest
Labels: Terrorism

The events in France in the last 53 hours or so, which have now ended with the deaths of three of the five suspects by the weapons of GIGN or whichever of the many French police units were involved in the huge operation, demonstrate three things in my opinion.
They aren't going to read this, but to the terrorists responsible for the murders of at least 17 people: have a good time in hell.
Posted by Silent Hunter at 5:16 PM No comments:

So, I've decided to watch the very first Star Trek series in order; I've seen odd episodes of various series (plus the first four and latest two movies), but never done a straight-through. For one thing, the 50th anniversary is next year, but I just saw it was free with my Prime subscription and decided to give it a go.

Skipping the un-broadcast pilot until the end of Season 1 (that's the Amazon Instant Video order), I've started with "The Man Trap"...

Wow; this is a story older than pretty much anyone on Phoenix Roleplaying bar Mike Palmer... and it still holds up excellently today. We're thrown very much straight into the action with a suspenseful tale of a shape-shifting creature that kills people by removing the salt from their bodies (that's not really a spoiler).

I can see why Captain James T. Kirk is such an archetypal character; the man oozes swagger (I can see why he got his shirt off a lot, the pecs are obvious even fully clothed!) and 'command presence'. Approaching these characters afresh is hard because we know them so well; they've become part of pop culture even for the completely uninitiated.

It probably won't be five years, but I'm on this voyage for the duration.


Posted by Silent Hunter at 5:41 PM No comments:

My opinion on this matter is as follows:

Rape is one of the most heinous crimes on the books and no-one convicted of such an offence should be allowed to play professional football, even if they have served their time, unless they can show considerable remorse. Mr Evans has not and instead continues to deny raping the woman; an appeal process is ongoing.

Until one of two things happen, namely he shows remorse (if he committed the crime, which he denies) or clears his name, no self-respecting football club should even think about offering him a contract. Second chances should given only when someone has admitted they've blown the first one in the first place.

Posted by Silent Hunter at 6:01 PM

Don't feel like writing especially much, so here are some screenshots I've taken in the variety of games I've been playing lately.

Posted by Silent Hunter at 4:12 PM No comments:

Let me start by wishing everyone a Happy New Year. Hopefully it will be better than 2014, which wasn't frankly a brilliant year, especially if you were an Iraqi Christian.

I'm working on a novel and so I don't plan to do as many big posts here; however, I will be aiming for little and often; hopefully at least once a week on something.

Some things I definitely hope to do:
So, stay tuned and perhaps you'll read something interesting.

Posted by Silent Hunter at 11:11 AM No comments: