I have today decided to deactivate my account on Twitter. It is too toxic and the time I am spending on there is time I can use on other things.
Posted by Silent Hunter at 7:24 AM No comments:

Bern Notice - or the US Democratic nomination process

It's looking increasingly likely that Bernie Sanders will be the Democratic candidate for President against Donald Trump in November and this contest will be interesting to put it mildly.

While Sanders will be the furthest left Democratic candidate since at least George McGovern, he will be going up against a scandal-tarred Trump whose approval rating, unlike Nixon's (whose slump came in his second term) is in negative territory. He's also polling well.

Sanders isn't Jeremy Corbyn - he doesn't have some of Corbyn's toxic associations for one thing. Also, with the US political system as it is, he will be likely heavily constrained by Congress in any domestic policy - in the way Trump kind of is. So businesses won't necessarily be as scared of him as a PM Corbyn.

I think there is a very good chance we end up with a Jewish President next year, although it ultimately depends on the economy. With Covid-19 in particular, there's a chance we could be in a recession come November.
Posted by Silent Hunter at 11:15 AM No comments:

Email ThisBlogThis!Share to TwitterShare to FacebookShare to Pinterest
Labels: 2020 Presidential Election, US Politics

Playing all the right notes, but not necessarily in the right order, I'm now jumping back almost 30 years to a vintage timetable that I picked up for Christmas in 2018.

Going back to the Grouping Era, it's time for this bad boy: 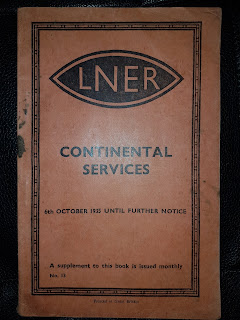 OK, it's not a man or a woman, but there's plenty of Bad in it... as in towns called 'Bad something'.

With a momentary pause in the bad puns, let's go...

1935 was a year when the international situation very much began its slide down the slope to the depths of the Second World War. The Luftwaffe was formed and conscription was introduced in Nazi Germany as Hitler openly went against the Treaty of Versailles; the Nuremberg Laws were introduced that stripped citizenship from non-Aryans. Mussolini invaded what is now Ethiopia in a quest for imperial glory that was a brutal campaign from the outset.

On the other side of the coin, canned beer was invented.

The popular conception of railways before the war is of a world full of steam locomotives. Certainly steam engines were the norm in most places. Electrification was the norm on tram networks and it was starting to spread to railway ones as well, who wanted to compete with them and increasing numbers of coaches as roads improved. Steam locomotives aren't the cleanest of things and they're not the fastest either. The 'sparks effect' of electrification increased passenger numbers and helped develop suburbs as people moved to cleaner areas away from city centres, commuting into work on electric trains.

The timetable itself notes that an Italian line is being electrified, while Germany, the Netherlands and Italy were starting to wire up main lines.

In the UK, the Southern Railway had pretty much done its suburban network in 1930, with mainline services next, using the third rail system. Brighton, Worthing, Eastbourne and Hastings were already connected, with Portsmouth being worked on.

The LNER itself had taken over electric suburban services in Tyneside and would start on wiring the line from Liverpool Street to Shenfield, although this was suspended with the outbreak of the war - British Railways would finish it off.

Europe had different political boundaries in 1935 - especially in the east of Europe, where the USSR was much smaller than it would become after the war and Poland was over to the east, including big parts of what is today Belarus, Ukraine and Lithuania. Lithuania in 1935 used standard gauge for its network, a result of the German occupation in the First World War so it had a direct connection to the network of most of Europe; there also appears to have been a standard gauge line to Riga, Latvia.

There is a lot packaged into this 185-page affair, certainly far more than you'd get in any modern timetable. To give you some of the highlights:

The actual timetables themselves take up a minority of the book and employ the standard format for the international timetables I have in my collection; you read the times down on the left hand side for services going away from London and up on the right hand side for coming back - this means you only have the station names one i.e. in the middle. The details of the through carriages available and any variations are at the bottom. One thing that is obvious is that the icons are a good deal more detailed than you would find in a modern publication. An example of the timetables can be seen below. I couldn't scan from this book without risking damaging it: 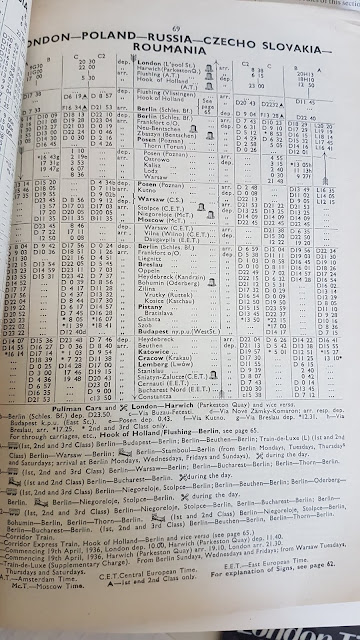 There are also three fold out maps at the rear of the book, one of Belgium, one of the Netherlands and the one below: 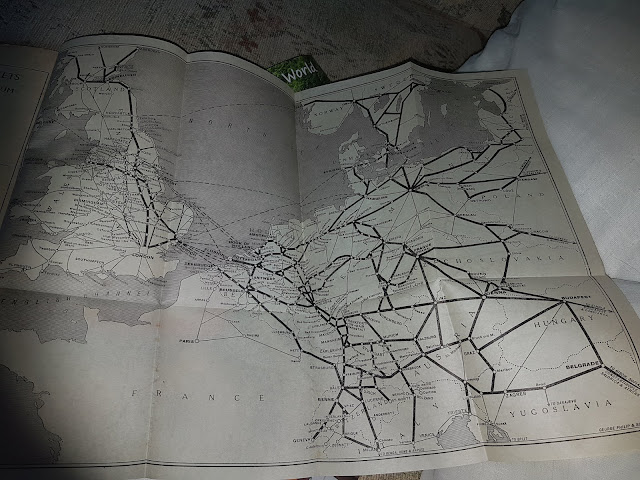 These schematic style, not quite geographically accurate maps for the LNER and LMS were created by George Dow and in fact were the inspiration for Harry Beck's world-famous London Underground Map. More information and history of these can be found here.

International travel was not exactly cheap at this time. £1 in 1935 was equivalent to £70 now. If you wanted to go to Amsterdam to partake of the red light district (it existed, but was a lot less in your face than today), you were looking at £4 17s 10d each for a Third Class Return via "Flushing" (Vlissingen, which no longer has any ferry services to the UK since the Sheerness service was terminated in 1994). That's over £300 each before luggage, hotels and meals were included. You were able to get special weekend tickets that allowed you to travel without a passport, but the precise information on these is not provided in this timetable.

(Yes, bachelor parties were around back then).

If your stag do inclinations stretched further afield to the Estonian capital of Tallinn, you were looking at £12 1s 9d for a Second Class Single; a visa was also required from the Estonian Embassy at 167 Queen's Gate, SW7 - open only between 10am and 1pm. This said, at least you could get a through ticket all the way there - you can only get a through ticket to Warsaw from the UK now, with the need to buy further tickets in Vilnius and Riga. Interrail is a thing for the whole Baltics now, but the cross-border connections are limited as you get further east and you might be better to get a coach.

London to Tallinn was possible with four trains and a ferry. Departing at 0930 GMT on Day 1, you'd be at Berlin Schlesischer Bahnhof, in English "Berlin Silesian Station" at 0733 the following morning, a journey time of 19 hours and 13 minutes, via the Harwich-Flushing ferry. This is now, after two rebuilds by East Germany, Berlin Ostbahnhof and remains a major starting point for international services, like the EuroNight Talgo sleeper to Moscow-Belorusskaya.

In 2020, there is no overland route shorter than three nights... Driving takes 28 hours straight; something impractical with the need to refuel, go to the toilet and sleep.

London to Berlin was a 20 to 21 hour journey with a sleep either on the ferry or the train; although the former involved having to pay a supplement on the express train in Germany. Avoiding that would add another five hours to your journey as you had to wait for a later slower train,.

As mentioned earlier, this timetable has a large array of information on those wishing to ship goods via rail; as the railways were a 'common carrier', they were required to take nearly anything that was offered to them, no matter how profitable the market was. The exceptions were manure and stuff like lime that could damage their stock. So you could get ship propellers put on a flatbed.

Full details of the rates available required you to contact one of the Goods Managers or a freight forwarding agent; since this would entail me doing a seance, I can't provide them to you. There were special inclusive rates for express goods at 805 Belgian francs per metric tonne to Antwerp, which was just under £6 - although this did not apply to perishables. These had to be delivered to Bishopsgate Goods Station before 3pm on any weekday.

The most common freight wagons at this were 20-foot boxcars and those could be shipped to the continent without the need to tranship via the Harwich-Zeebrugge train ferry that ran from 1924 until 1987; these wagons could be sent as far as Poland and 'Roumania' (the spelling in English didn't standardise until 1975). LNER also advertised a through shipment company called All Rapid Transport Service, who said they could ship goods to Palestine (the British Mandate) in 9 days, China in 27 days "&c &c".

Rather relevant in today's day and age were Customs regulations. At time where the European Union was over twenty years from creation, every frontier required some form of customs examination and the items that were subject to duty, restriction or outright prohibition ranged from the normal to the downright bizarre, like:

Also, don't try to bribe a Customs Officer or you could be fined £200. Also, you won't be allowed to pass Go.


The inter-war years are considered a golden age for the railways and to an extent that's true, with the sheer array of international services, along with some very snazzy rolling stock. However, it wasn't exactly the fastest of services and international travel could be quite bureaucratic, especially if you wanted to bring home some hats.

I'd go for a visit, but I wouldn't like to live there.

Posted by Silent Hunter at 8:57 PM No comments: