In this series of posts that I'll doing over 2018, I'll be reviewing, so to speak, some of the old railway timetables that I have in my possession or have managed to locate online, giving a general view of how things have changed for better and worse. The plan is for a total of six of these posts, but that may well change... and drag on into 2019.

In this first post, I'm going to look at the January 1958 ABC Railway Guide. 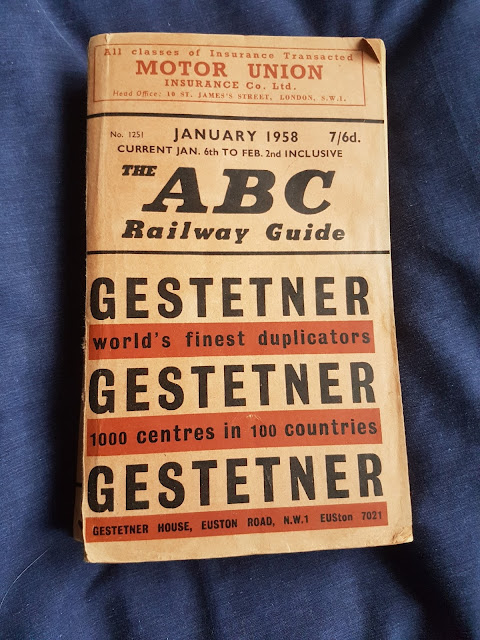 Published monthly from 1853 to 2007 (the name has been revived for an enthusiast's guide to rolling stock and locomotives) and a rival to the Bradshaw's books that have featured in Michael Portillo's long running TV series, this book's main function is to provide an alphabetical list of all the railway stations in Great Britain and tell you how to get there from London, with timetables for the major routes at the back.

Costing 7 shillings and sixpence (37 and a half pence in new money), this tome can be considered pocket sized if you have a garment with large pockets; it's 21cm by 12.5cm by 3.7cm. Coming in at 918 pages counting the covers and weighing 682 grams (1lb 8.1 oz in old money) this is more an object one would keep in the study for reference rather than lug around on a commute.

This has adverts. Quite a lot of adverts. Firstly on the cover for the Motor Union Insurance Co. Ltd, (which I believe is now part of the AA) and also for Gestetner, whose duplicators were the predecessors of the modern photocopier - you would create a master copy something of a form or leaflet, then use this to make as many copies as you needed, at least until the master degraded.

The main adverts, however, are for hotels. 252 pages of them, arranged by town so you can be find what is available in your planned destination. Some of the things advertised for these hotels are things that one doesn't tend to see advertised in modern hotels because they're kind of taken for granted: 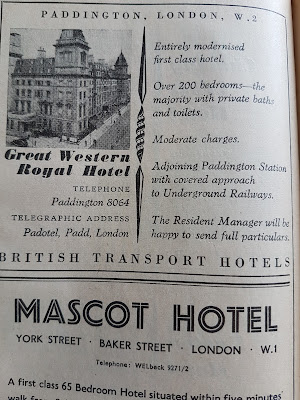 Also quite a few are quoting weekly rates. This was a time where holidays were much longer and care homes fewer; an old person of means might well move into a hotel as they'd be looked after. The Major in Fawlty Towers is one example.

We then have four pages of tables for sleeper services and these were a lot more numerous back in 1958. Taking a typical Monday night, a Londoner could get:
Some of those had multiple portions, a restaurant car and "improved type 2nd class accommodation". The last of these probably refers to the British Railways Mark 1 sleeper carriages that were being introduced at this time; these were replacing Grouping era sleepers with four-berth compartments that lacked a washbasin.. Not many of these survive; they had a lot of asbestos in them for one thing.

The main section of the timetable provides an alphabetical list of stations in the mainland UK with listings ranging in detail from a list of all the trains from London for main stations (with departure and arrival) to times from a major hub for branch lines. For example, Ashton in Devon is 40 minutes from Exeter St. David's and served on weekdays only... although less than five months later, it lost its passenger service entirely.

Pages 416 to 652 contain 122 full timetables for the London suburban routes, the Underground and finally boat trains to mainland Europe. 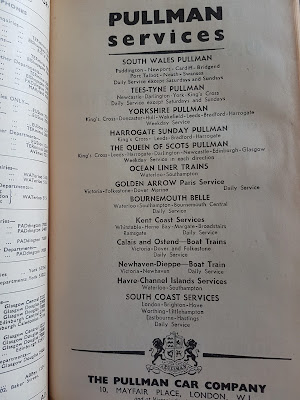 British Railways had just turned 10 at this point and was still building steam locomotives; while simultaneously constructing new diesel and electric traction, the last for lines that were about to be electrified or had already been. All this was going on under the aegis of the 'Modernisation Plan' published in December 1954, back when you didn't have a fancy title designed for Twitter hashtags for this sort of thing and social media was a group getting together to watch a television show.

The Modernisation Plan would have decidedly mixed results in terms of traction; while it gave us much-loved units like the 4CEP and the burly beast of a locomotive that is the Class 47, many of the diesel classes were rushed into production by people with limited experience in building diesel locomotives, with a result that some didn't last much longer than steam locomotives. Ultimately, its goal to eliminate BR's operating deficit was a failure, mainly due to the plan being more 'replace steam' than 'update the railway for changing patterns of transport'. The next step was Beeching and all that entailed.

Electrification therefore was decidedly limited at this point outside London, where all the Southern Region suburban lines had been done before the war, the Liverpool Street to Shenfield suburban service just after it and the long process of getting the wires along the West Coast Main Line was yet to start. Steam was still very much king at this point in time, with pre-war and wartime classes joined by the post-war 'Standards'. Some of those could reach 100mph on a good day with a highly competent crew and a decent run or downward gradient; they certainly could not sustain it.

British Railways had started to introduce the frankly superlative Mark 1 coaches (in timber veneer and not laminate) from 1951 onwards, but they were by no means universal. Grouping era stock was still running until the early 1970s, such as the 4COR EMUs out of Waterloo and various non-corridor suburban stock. Some of the Mark 1s themselves were 'closed compartment', which wasn't the most pleasant of things on a late night.

Many services were what was known as a 'through carriage'; a number of carriages attached to one particular train, detached along the way and connected to another service when they didn't form one of their own. Getting in the wrong coach was not a brilliant idea.

Lines had been being closed for a while and would continue to be; the Midland and Great Northern Joint Railway line in North Norfolk (now partly served by the heritage North Norfolk Railway) would be recommended for total closure in May 1958 and go the following year; in January it was served by a decent number of long distance trains running from King's Cross and Liverpool Street. However, Beeching had yet to arrive and swing the axe still further.


One final thing is safety; the AWS system was finally being made mandatory across the network following the 1952 crash at Harrow and Wealdstone, although main lines had priority, which was too late to prevent another crash at Lewisham in 1957 that killed 90 people. Those fairly common events are one thing that enthusiasts definitely do not miss.

As mentioned, steam is a good deal slower than diesel or electric traction and this shows in the journey times:
Conclusion

Things were a lot slower under steam, but you might have wanted it that way...

Posted by Silent Hunter at 12:03 PM No comments: