Coming up in October

The 1st sees three elections- Austria, Bosnia and Herzegovina and Brazil's first round. In Austria, it could be close, but the OVP will probably win. Bosnia is pretty important, according to some analysts, because of issues over secession. Lula will probably win again in Brazil.

The 7th has Latvia.

Belgian municipals on the 8th.

Ecuador on the 15th.

Bulgaria Presidency and a Panama Canal expansion referendum on the 22nd.

We finish on the 29th with a run-off in the Democratic Republic of the Congo and Brazil's second round. Kabila will probably win in the DRC.
Posted by Silent Hunter at 2:42 PM 1 comment:

Caught the end of Kinnock's 1985 conference speech on BBC Parliament- you know the one where he attacked Militant. Good speech, very good speech. I don't understand all the context, but clearly some of the audience wasn't happy with the bit about Manchester City Council (I can't recall a walkout under Blair).

The Political Map of Europe 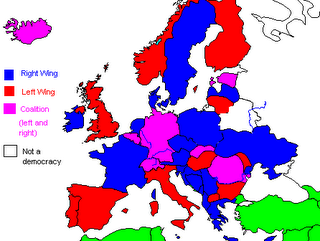 Any errors, let me know in the comments.

'Coming up in October' will be up tomorrow.
Posted by Silent Hunter at 1:42 PM 8 comments:

Came in at about 56 minutes long in the end.

Some thoughts on it:

It wasn't the best of speeches, but it was good. Well done, Tony. And thank you.

As you've heard, there was a coup in Thailand earlier this week. Thaksin Sinawatra, the Thai PM was overthrown by the military while in New York for the UN General Assembly.

Regardless of what you think of Thaksin, his record and policies, a coup was not the right way to deal with him. The courts had already thrown out the last election and there was going to be another one. If the people wanted Thaksin out, they would have voted him out at that election. Now they won't get a chance to make their decision on him.

Instead, an illegitimate military regime will start the process that will lead to a new constitution and PM. That's not the way it should happen. Thaksin should be allowed back into power.

It's a good thing there were no shots fired in this. It's a bad thing this coup happened in the first place.

I hope Thailand returns to democracy in the near future.
Posted by Silent Hunter at 3:05 PM No comments:

As you may know, Sweden held its general election today and the left lost. Perrson has resigned as PM.

Naturally, as a social democrat, I'm unhappy when any PES party loses an election. At least it wasn't that bad a loss.

Sometime before the end of this month, I'll post my "Political Map of Europe". However, can someone tell me whether Yuschenko is a left-winger or a right-winger?
Posted by Silent Hunter at 3:31 PM 1 comment:

Well, no exact date (Blair will probably go when he feels like going- the big question is whether it's before the May elections), but Blair's made his committment now. I think it's fair to let the guy choose the date he goes- that's what he deserves after leading us to three consecutive victories.

I suppose the leadership race starts here, although it won't really kick until Blair sets a date.

Edit- When the ballot comes up, I'll probably vote for Brown and, if he runs, Straw for Deputy Leader.
Posted by Silent Hunter at 3:20 PM No comments:

As you're probably aware, seven junior ministers, including Defence Minister Tom Watson, resigned today because Tony Blair hasn't named a date for when he's going to go. They had all signed the letter calling for Blair to set a date.

I'm not sure what to think about this whole business. It's just that this endless speculation over the leadership stops us from doing the job of governing effectively. Blair will go in his own time (and probably when we least expect it). He's already said he won't fight another election and that his successor will have plenty of time to govern. Let him decide how he wants to go, or if you want him to go now, challenge him for the leadership. Just do something instead of making statements. I just want this speculation to stop- it's annoying.

Your opinions are welcome in the comments box.
Posted by Silent Hunter at 2:37 PM No comments:

The Labour Party now has a podcast (kudos to http://www.bloggers4labour.org for the tip). I haven't listened to it, but it just seems to be ministerial QandAs and speeches ATM. Perhaps Party HQ should get a prominent Labour celebrity (John O'Farrell anyone?) to do a weekly round of news and Tory-bashing. Don't forget the Tory bashing. Stick in some Liberal-bashing while you're at it. Maybe some competitions as well. We'll have to see.

I didn't get on the MAD Council, because it wasn't first come first served. I might challenge for a seat if a councillor does particularly little.

I'm still contributing to the Merit though, with a weekly article on NS news for InterMet. If you have any NS news, comment here.

If you want more info about the game, go to www.nationstates.net
Posted by Silent Hunter at 3:55 PM No comments: