0910 saw some further vehicular destruction from a red airstrike, but Coyote was gradually running out of aircraft. The following turn saw Red eliminate a few units in 0701 and a Hummer put an anti-tank missile straight into a BMP’s face. His forces started to make their way through the gap at the top of the map and then ran into an M1 unit I’d cunningly concealed for such an eventuality – although one tank had been spotted earlier and taken out. Better positioning needed next time.

I dropped a lot of artillery on the map around this time, but it is very difficult to take out a moving target just by shelling it (especially when you lack the experience to calculate ahead and shifting the target resets the accuracy that you’ve built up. Most of my shells just rearranged the landscape.

In square 1102, an infantry unit fought against a moving BMP squad and lost. Not a good idea to take on something like that when you’re out of anti-tank weapons. We did have a few armoured-on-armoured fires, which resulted in a number of successes for me (120mm main gun on the Abrams – lovely) and I had a couple of successful airstrikes as well.

As 0919 finished, the initial part of Red’s main force was hitting my lines in the south. Or so I thought. 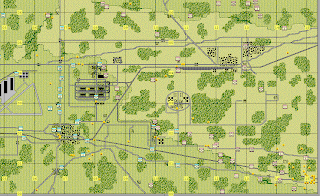