This post was written for the excellent people at the Guard Frequency podcast and will hopefully be mentioned in a future edition of the show. At any rate, since they couldn't go, I decided I would write a report for them.

Also, I didn't take many photos of the event itself - it was a bit dark for any decent ones once it had started. You can watch the livestream again (or for the first time) via the Roberts Space Industries website. 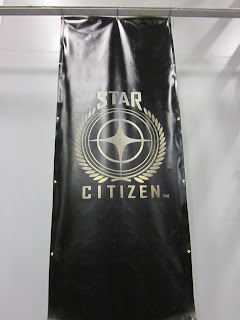 The journey in a Virgin Trains Class 390 Pendolino from London to Crewe via the Watford Gap was comfortable (the tilting mechanism isn't nausea inducing at all) and on time, but I was not overly enthusiastic about the free lunch I got in the First Class area, namely a pre-packed sandwich, biscuits and some chocolate. It was, however, a sight better than the Northern Rail Class 323 that would be my connection to Manchester Airport, which was very bare-bones and made funny noises whenever it accelerated.

I checked into my hotel room, having two groups of hard men wrestling with a funny shaped ball on in the background as I checked my incoming emails - Scotland narrowly won, doing much better in this tournament than my native England. Definitely a lot more space in my room than in my Aurora LX, that's for sure.

At 6pm, I called for a cab to get myself over to the Runway Visitor Park for the event led by Chris Roberts, who has not been having a great couple of weeks, what with the activities of certain opponents of this project.

I decided to arrive a bit later than the doors opening time so I wouldn't have as long to wait before the scheduled start time of 8pm local time. In fact this merely meant I ended up near the back of the queue to get in, something which meant it was half an hour before I got in. This is not the longest time I have spent in a queue for a convention by the way.

During the wait, much discussion was had especially of one D. Smart. A guy I was with thought he should have come wearing a Smart mask. It was also clear from conversations before and afterwards that some people had travelled some serious distances to be here, getting up at very early hours.

The Runway Visitor Park hosts an array of old aircraft and I would certainly want to visit there properly at some point. The main hall contains one Concorde (which the main stage was underneath), which those with VIP passes could actually go in. Unfortunately, I didn't actually have one... as mentioned, I only have an Aurora as my main ship, plus whatever else I have on REC.

I must admit to being disappointed with the goodie bag - one badge, one unpainted model, one sticker and one poster. OK, I really liked the poster - which is now in my bedroom - although it was a bit difficult to get into my suitcase, let along the other drawstring bag I brough with me. Good thing I will have a virtual version for my hangar to go with my Golden Ticket (he says, trying not to brag). 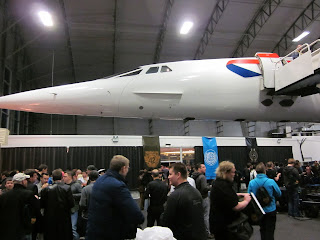 However the food was very nice, even the lamb despite what Morrow said later on. We were also given a voucher for a free drink from one of the two bars; as I'm not really an alcohol person, I had a J2O. Anyway, enough about my drinking habits or the lack thereof and onto the event.

I noticed quite a few people in costume, some of them in ones from a somewhat different Verse to our one - including no less than two guys dressed up as Jayne Cobb from Firefly complete with knitted hat. As I quipped to one of them, he was an awful long way from Canton. Cosplay really isn't my thing however and it was actually a good thing I brought my coat as it got a bit chilly later on until they turned on the heaters. There were of course frequent sounds of planes taking off in the distance.

Pride of place for best "gimmick" of the night goes to the guy who brought along a lampshade on a stick, which he got many CIG people to sign. Speaking of signing, there was a poster for all the attendees to sign, which got a bit hard to find free space on by the time I'd gotten into the venue.
Slightly less pleasing was the fact that the number of people in costume possibly outnumbered the number of those with two X chromosomes, that is women, who were not on the catering staff.

Speaking of women, Sandi Gardner is surprisingly short in real life even with heels on. Not of course there is anything wrong with that.

The event in fact started half an hour late - apparently they were finishing a build. As I thought to myself, this is CIG; half an hour is nothing compared to the many other delays we've encountered over the three years since this project started.

We of course started off with Sandi reading out a letter she'd written to the community thanking them for all their support - she's been subjected to some vile accusations over the internet from various people over the last few months and it was clear that it has gotten to her. Trolls should be aware that words do hurt. She was then given a massive bunch of flowers.

The video summary of the story so far was interesting, but only served in my mind to highlight that we've had somewhat of a drought in actual playable content over the last few months - not that I don't like the Social Module, it's just that I was hoping for some FPS action by now.

We then moved onto the next steps for the game - 1.3.0, which is basically a further upgrade to the Social Module and Arena Commander... then 2.0, which was the first really big announcement of the event. The delay to FPS was worth it because we're going to get the PU, or at least the start of it much earlier than I thought we would. Even the area around Crusader is going to be huge by any standard and filled with much more than you'd find in a certain other space game at the moment. We then got to see a live demo of the Crusader action - this can be found on-line, but looks very impressive indeed. This included some decent spaceship action and also a spot of FPS against some pirates, although I'm oddly a bit disappointed we didn't get to see what happens in the game when you turn into a Norwegian Blue, so to speak i.e. 'die'. Roberts was very clear not to give firm dates on anything - as we know what happens when we get those.

Then was the announcement of the Ark Star Map from Dave Haddock - and the fact that it's already gone live. I took a look at this when I got home and while it's still very bare bones, it looks great. The travelling through the jump point between systems actually reminds me somewhat of Stargate SG-1, but we will of course have somewhat bigger ships.

The Million Mile High Club - well, I don't think I'll be eligible for it myself, but maybe you guys can invite me? Hint, hint? As for the stuff over the Saitek HOTAS, this didn't really interest me. I'll stick with my Speedlink Black Widow for the moment, thank you very much. I do intend to try to use the referral program with my own contacts - at any rate, I hope we hit a million citizens soon. (Edit: I wrote this on Monday, that milestone was achieved on Thursday)

The reveal of the Sabre fighter; well, it looks impressive, but I'm not likely to do a great deal of actual dogfighting in the PU at any rate. Piracy isn't my cup of tea and at any rate, I have problems getting hits with guns in AC as is.

Right, onto the big event... the Squadron 42 cast reveal. We got the suitably rousing speech from Gary Oldman's character (I didn't recognise his voice initially) - and let's just say that he's trumped one Eleanor as my favourite fictional character called Bishop. Hopefully he won't end up like one Admiral Tolwyn, for those of you who are Wing Commander fans. After the speech, we then got the reveal of the cast via the title sequence, with various levels of cheers as the names popped up. It's definitely the case that you really can't do a British-based project these days without having at least one person who has been in Game of Thrones in it - indeed we have two in the form of Liam Cunningham and Gemma Whelan. The former is in fact my favourite casting choice - Ser Davos Seaworth is on my favourite characters from the show and it's also notable that this isn't his first time playing a Captain of something - he was a submarine commander in an episode of Doctor Who.

I must admit that I had to look some of the actors up later - and mistakenly thought Rhona Mitra, whose career includes Strike Back and apparently being the original Lara Croft model, was the former MMA fighter, who is in fact Gina Carano... Anyway.

Chris demonstrating the size of the scripts was impressive, although the optics of him dropping the SQ42 scripts weren't brilliant.

The actual demo - well, if that's the early version, the real deal is going to be something else... and will indeed be a computer testing game - I got my current PC solely for Star Citizen in fact. It looks superb - and the guilds with an Idris will be very happy bunnies indeed as it is superbly detailed - even with dialogue sync issues in this. Looking forward to seeing some actual combat in that game.

Only slight gripe is that there isn't an option for the player character to be female - it would be nice to have a choice and that's something hopefully for the future.

As a final note, I will say that no-one looks very dignified in a motion capture suit with their face covered in tracking dots.

They brought out a cake at the end, but I don't think this was for the guests - at any rate, it was getting a bit late and I wanted to get back to my hotel. I was one very happy man when I got back to my room. I popped into Manchester proper the following day and I must say I was impressed by that as well - I would go there again.

I'd like to thank Imperial News Network, whose live blog has served as a memory aid for putting all of this together.

See you in the Verse and I will be staying on the Guard. Keep up the good work.